Wake Up The Sun 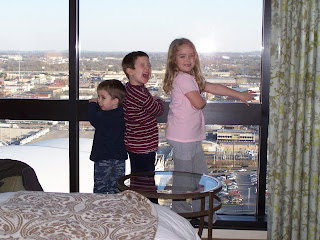 I have been saving this story for a special occasion, but its time to write it down. Earlier this year my family and I took advantage of some hotel points, and we stayed at a high-rise hotel in downtown Nashville. We entered our room for the first time late in the afternoon, and the sun was very bright as it descended over the city. It was an impressive sight. We left the hotel rooms and spent the next few hours downtown for dinner and a walk. When we returned, the view from our hotel of the dark city was a huge contrast to the sunset we had seen a short time ago. I left the room for ice, and when I returned my 5 year old had grabbed a toy plastic flute and was playing a tune to the window. I asked him what he was doing, and he responded, “I am waking up the sun.”
I was struck by the boldness of this child who still believed he could do anything. When did we get so jaded by reality that we quit such ridiculous attempts? I think more of us should keep a child-like faith that causes us to try the impossible. Why can’t the solar system respond to our toy plastic flute? Let’s wake up the sun.
Posted by Aaron Allison at 11:24 PM

That was a great night! We are blessed to ge to do so many great things!!!