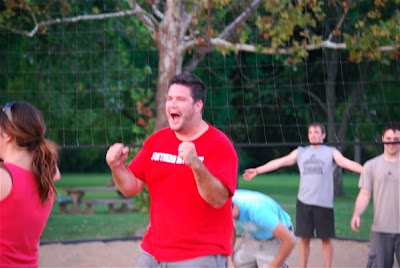 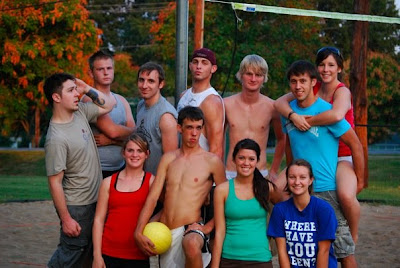 I had a really good few days last week, but I didn't blog because I was frustrated with some hosting issues for this blog. So, I will catch up everyone little by little to keep with this theory: To have people actually read your blog, you have to keep the post down to a few lines per paragraph.

Sand Volleyball with the Young Adults
Last night, Beth and I played volleyball with the young adult group
from the church (see pic of this great group). It was a lot of fun . . . I kind of got into it (see pic for evidence). I was surprised how quick the competitive juices got flowing again. I wasn't near as athletic as I used to be (no surprise), but I still hung with the youngsters.

A Day Off In the Flower Beds
I had a true day off on Monday. The weather in the Nashville area was amazing (can't believe its August!), so I spent most of the days pulling weeds from my flower beds . Since I
neglected this all summer, it was an all day job. I lost a lot of flowers in the process, and it made me think of this passage as I worked . . .

"The kingdom of heaven is like a man who sowed good seed in his field. 25But while everyone was sleeping, his enemy came and sowed weeds among the wheat, and went away. 26When the wheat sprouted and formed heads, then the weeds also appeared . . . The servants asked him, 'Do you want us to go and pull them up? No,' he answered, 'because while you are pulling the weeds, you may root up the wheat with them. 30Let both grow together until the harvest. - Matthew 13:24-30
Posted by Aaron Allison at 9:23 PM